Today Apple released iBooks 2, a beautiful new format for interactive books that they hope to use to “re-invent the textbook”.
Steve Jobs reportedly spent the last few years of his life planning to shake up the textbook market, and revitalise education. Today’s event in New York is the first education-only launch from Apple in a long time. Has Steve added to his legacy? Or is this announcement just hype?

The background: Textbooks are big business. They are expensive. The industry is dominated by a few publishing giants. Steve Jobs is quoted as saying the US market for text books is worth $8bn per year. According to Reuters, 90% of this market is controlled by the big three: Pearson, McGraw-Hill and Houghton Mifflin Harcourt.

The Apple vision is by moving textbooks onto the iPad, they can be cheaper, more interactive, and ultimately more useful as educational reference tools. And at first glance it does look exactly like that.

So what is the iBooks 2 format about?
The iBook format has been enhanced, to allow embedded video, interactivities, quizzes etc. In itself this is nothing new. There are several beautiful eBooks that have been released as apps that do exactly this (like The Elements). But the big difference here is that these capabilities are included in the eBook format itself, so you don’t need to create an app to distribute it. You can do so as an eBook. You can also highlight and annotate the books, and even generate flash-cards to help you learn key sections.

Which textbooks are available?

All three of the major publishers mentioned above have been signed up already. Right now there are only a few in iTunes (none available outside the US), but there is a very lovely (free) sample called Life On Earth, which is well worth a viewing.
Early pictures from the event, here: http://www.theverge.com/apple/2012/1/19/2718539/ibooks-2-first-hands-on-photos

And who else is making the new eBooks? Right now, anybody can! 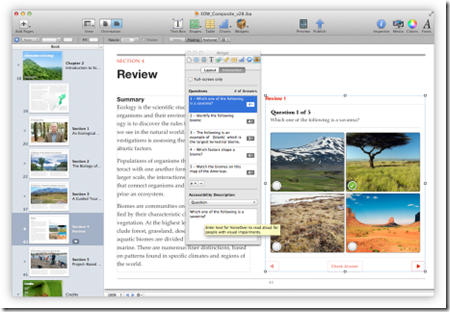 The best bit about the format is the free iBooks Author which allows anybody to create an eBook, and add media, and interactivities. We are not just talking textbooks here. Anybody with a great book idea can add their own media!

The theory is you can even add rich HTML / Javascript but we haven’t tried this yet.
If you would like to see more samples, those good people at TheVerge have a bunch of photos of it in action over at http://www.theverge.com/2012/1/19/2718646/ibooks-author-hands-on#2879838

Will this transform educational publishing? Yes, I think so.
Especially in the marketplaces like the US where so much money is currently being spent on the old-skool paper versions.
But I also think that Open Educational Resources will transform educational publishing too. As will other non-Apple platforms. Remember, these eBooks are iPad only. So this is an important step forward for education at large, but not the only way.

Will this transform education? No.
This is the point where technology enthusiasts and real teachers often get “their streams a little crossed”. It is useful to have a richly engaging eBook? Absolutely! Do on-screen interactivities take away the need for any interaction with peers and teachers? Of course not!

So – we are hugely enthusiastic about the new format, especially given the free authoring tools. But also slightly concerned that the hype is masking some more significant issues ahead. As Seb Schmoller says, we probably need to watch and wait to see how many of the details pan out over the next 18 months.
Posted by geoff at 7:46 pm